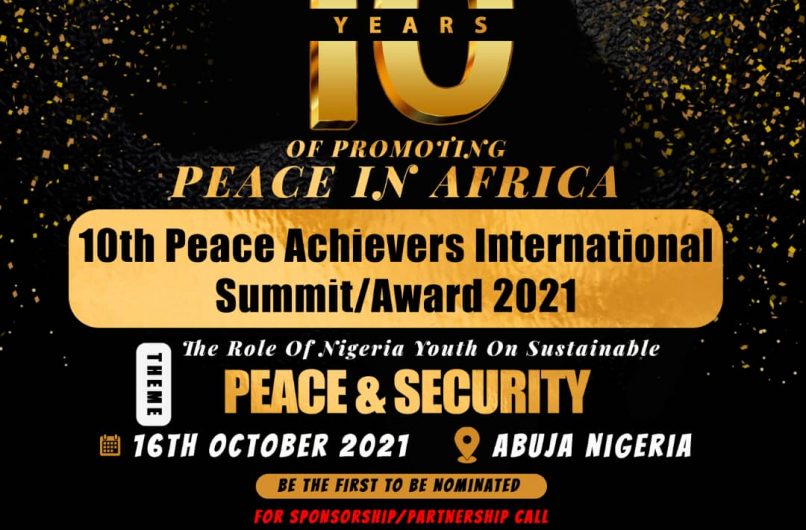 In Nigeria, an international peace-based Organization, known as Peace Ambassador Agency Worldwide has made public her newly rebranded identity. The Organization released a new logo ahead of its forthcoming 10th edition and Anniversary celebration of Peace Achievers International Summit and Awards, holding on the 16th of October in Abuja, the capital City of Nigeria. This newly rebranded logo was officially released on the Organization’s website and its social media handles few moments ago.

Speaking Exclusively with the President and Founder of Peace Ambassador Agency Worldwide, the sponsors of Peace Achievers International Summit/Awards, Amb. Kingsley Amafibe described the newly rebranded identity of the Organization as a sign of specialty, as he emphasized on the forthcoming 10th edition of Peace Achievers International Summit/Awards 2021, themed “The Role of Nigerian Youths on Sustainable Peace and Security”.

He noted that the 10th Anniversary Edition will also be celebrating 10years of his Organization’s commitment in areas of promoting peace in Africa. He however encouraged Crusaders of peace to continued in their undying interest for the growth and support of peace as their nominations will be considered based on impact.

Over the years Peace Achievers International Summit and Awards has remained one of the most well attended Award Occasions organised and held in Abuja Nigeria. It has witnessed the recognition and Honour of great leaders in Africa, Peace Workers and other contributions towards the advancement of peace in crisis challenges sectors across Africa and especially in Nigeria.

Theme
The role of Nigerian Youth on sustainable Peace and Security

Be the first to be nominated