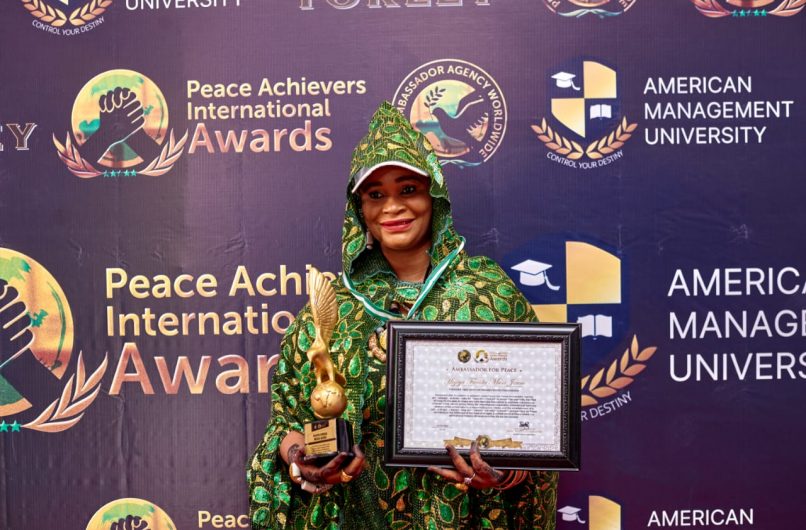 The president and founder, of Free Light of Nigerian Youth Foundation (FLONY) Hajiya Farida Musa Jauro has been honoured with the award of excellence in Peace and Community Development as Woman Change Maker of the Year.

The award ceremony which took place recently at Sheraton Hotels Abuja had as the theme, “Role of Nigerian the youth, Business & Community leaders, Media & Security Agencies in the 2023 general elections”.

The award is in recognition of her efforts towards enhancing the living standards of his people, community and philanthropic initiatives.

Hajiya Farida Musa Jauro founded FLONY, a non-governmental organisation in May of 2020 with the cardinal objective of providing positive development that is targeted to reducing the poverty rate the Nigerian society and providing Programmes that are geared towards stimulating and building the economy through self-reliance amongst the women and youths across the nation.

FLONY has the mission of improving the economic stability of vulnerable women, orphans and youths through education, advocacy and research.

FLONY Foundation prides itself on a well-guided organization with the objective which cuts across development aimed at making women and youths skilled, equipped and to function as self-employed members of society.

It uses entrepreneurial skills development as a tool for poverty reduction, conflict mitigation and promotion of social cohesion.

FLONY also seeks to empower women and youths to gain employment or become self-employed agents of positive change as well as to promote and strengthen democratic processes and civic education.

In his remarks, the lead Organiser and Project Director of Africa, Peace Ambassador Agency Worldwide, Amb. Kingsley Amafibe congratulated all the awardees for standing tall in selfless service to humanity, affirming that the agency will be at the forefront in identifying and recognizing eminent Nigerians deserving of awards of excellence.