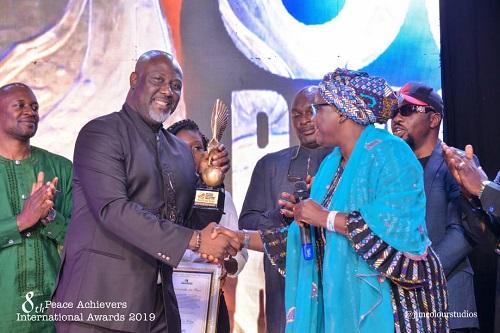 It was a night of glamour and recognition at the 8th Peace Achievers International Conference and Award which took place at the Transorp Hilton Hotel, Abuja on the 22nd of September 2019.

Celebrities and other crème dela crème of the society were on hand to witness firsthand the much talked about event organised by Peace Ambassador Agency to commemorate the United Nations World Peace Day.

Event which has become one of the biggest gatherings of influential personalities in Africa saw, Governor Aminu Waziri Tambuwal, former Governor of Sokoto State, Dr Attahiru Bafarawa, Senator Dino Melaye and Hon. Shina Peller were some of the topnotch dignitaries recognised on the night.

According to the Chairman, planning committee, Amb. Kingsley Amafibe, the award recognises individuals that have contributed immensely to nation building, through peace related programmes and advocacy, job creation and entrepreneurship. “They were honoured for their leadership roles and selfless service in peace building and commitment to programmes that promote peace, youth and economic development” he said.

The award categories covered a vast range of sectors to prove the organizations promise on rewarding individuals from different walks of life. There were categories for excellence in youth empowerment, award for outstanding leadership in public sector governance, award for innovation and technology, award for NGO of the year to name a few.

In a related development, a 25 year old Accounting graduate, Miss Blessing Ikponmwosa, emerged winner of the 2019 edition of the Miss Ambassador for Peace Africa pageant who beat 25 other contestants to win the crown. Also, Esther Daniel Uzochukwu, Joy Enode also won different categories of the show.

In her speech, Ikponmwosa pledged to be committed to campaigning effectively for Nigerians’ peaceful co-existence as well as security in Africa. “I really want to use this opportunity to contribute my quota to building a peaceful society for all. I will work hard in line with the organisation’s objective to promote tribal and religious tolerance among Nigerians.”

An element that made this year’s event different from previous editions was the inclusion of an elaborate fashion runway and exhibition which featured several fashion brands and models. It was also a night of good music and comedy. Popular R’n’B group, Styl Plus took the audience down memory lane as they dished out their classical hits to the excitement of the audience. That set the tone for more fun as MC Bob, Shotcut, Funny Bone and Akpororo thrilled the audience to scintillating stand-up performances.

The 2019 edition of the Miss Ambassador For Peace Africa Pageant/Peace Achievers Awards  certainly lived up to expectation in many ways than one.

The Peace Achievers Award is held annually alongside the Miss Ambassador for Peace pageant since its inception in 2012.